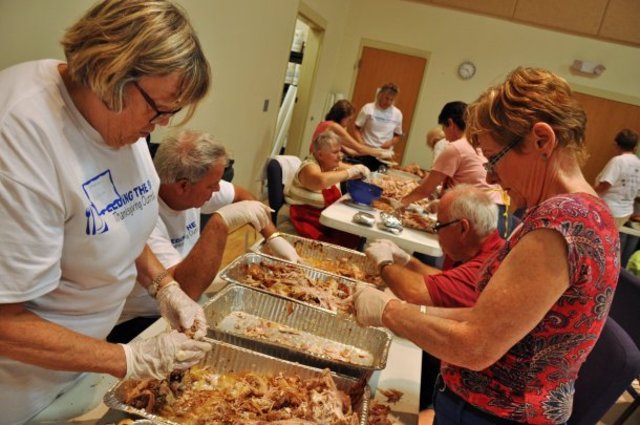 By Laura Gates. Jesus did it with just five loaves and two fishes. It takes a bit more for Lamb of God Church and its community partners to feed 5,000.

The annual Thanksgiving outreach relies on hundreds of volunteers to cook, package and distribute nearly 500 turkeys— along with all the fixings— feeding the needy in a five-county area. The massive effort starts the weekend before Thanksgiving, roasting turkeys in batches of two dozen at a time.

A refrigerated truck is parked outside The Vineyard at Lamb of God, a building normally used for preschool and church fellowship. On Monday afternoon, as soon as the preschool cleared out, a corner of the open area was partitioned off, the floors lined with industrial paper and tables set up for turkey pulling.

Volunteers came from Naples and Fort Myers, as well as beyond to be a part of the massive effort.

“We had a guy who came down from the Panhandle on his boat last year,” said volunteer coordinator Kassie Monsees. “He had heard about us on the radio.”

The ages of volunteers are mixed from students to seniors. Some come as individuals, others as groups: families, youth groups, Girl Scouts, Cub Scouts, Bible study groups, sports teams and more.

Mary Ross always brings a crew from Missionary Directional Mission Church of God in Fort Myers. The church gets about 300 meals from Feeding the 5,000 to serve in their area.

“We feed the homeless that are around us, and we have a lot of elderly people that are very low income,” Ross said. “We take care of all of them.

Michael Barry drove up from Naples to volunteer after stumbling across Feeding the 5,000 on the internet.

“I have free time, and it’s a good cause,” he said, adding, “I’m making friends one turkey at a time!”

Other volunteers make it an annual tradition. Bonnie Olson came with friends from her book club from March Landing. She’s also on the board of directors for Interfaith Charities of South Lee.

“I just always feel so blessed with what I have, so if I can help with this effort to give a nice, warm meal to those who don’t have as much, it makes me feel good,” she said.

Lamb of God partners with more than 30 agencies in a five-county area to identify families and individuals in need of a Thanksgiving dinner. About 2,000 meals go out to those distribution centers, including many elementary schools in low-income areas. Another 5,000 meals are delivered to homes by volunteer drivers Thursday morning. Another 100 or so are served at the church, making the total fed about 2,000 more than the name indicates.

The total operation costs nearly $40,000, which comes from a combination of donations, grants and in-kind gifts of food and supplies, said organizer Art Nicoletti. Grants include $10,000 from the Bob and Delores Hope Foundation and $5,000 from the Shadow Wood Charitable Foundation. Another $5,000 is raised during Trivia Night at Lamb of God in February, when guests pay $35 to eat the same turkey dinner and play trivia games.

Nicoletti and his wife, Susan, start thawing out turkeys about a week in advance of the big day and keep a steady stream of roasted birds circulating through the kitchen and into the hands of volunteers.

“We like the grassroots part of it,” Art said, noting about half the volunteers come from the church and half from the local community. “We want to connect as much as we can in the community. We like to say it’s a community event led by Lamb of God.”

An “assembly line” of people gathers as the big day approaches, each having a specific function in packaging meals. Drivers arrived at the church Thanksgiving morning, and were loaded down with turkey dinners, maps and phone numbers for the day’s deliveries.

“It’s a little bit of organized chaos,” Nicoletti said. “We get a little better at it every year, and it’s so much fun.”

Russ and Marcia Rees have been volunteering with Feeding the 5,000 since its start about a decade ago.

Feeding the 5,000 has distributed more than 30,000 Thanksgiving meals in Southwest Florida during the last five years, Nicoletti noted.

“It’s highly coordinated,” said first-time volunteer Kathy Roddy. “They definitely know what they’re doing. When you think of the number of people who actually need a Thanksgiving meal, I think this is very important. It’s a good thing to do.” 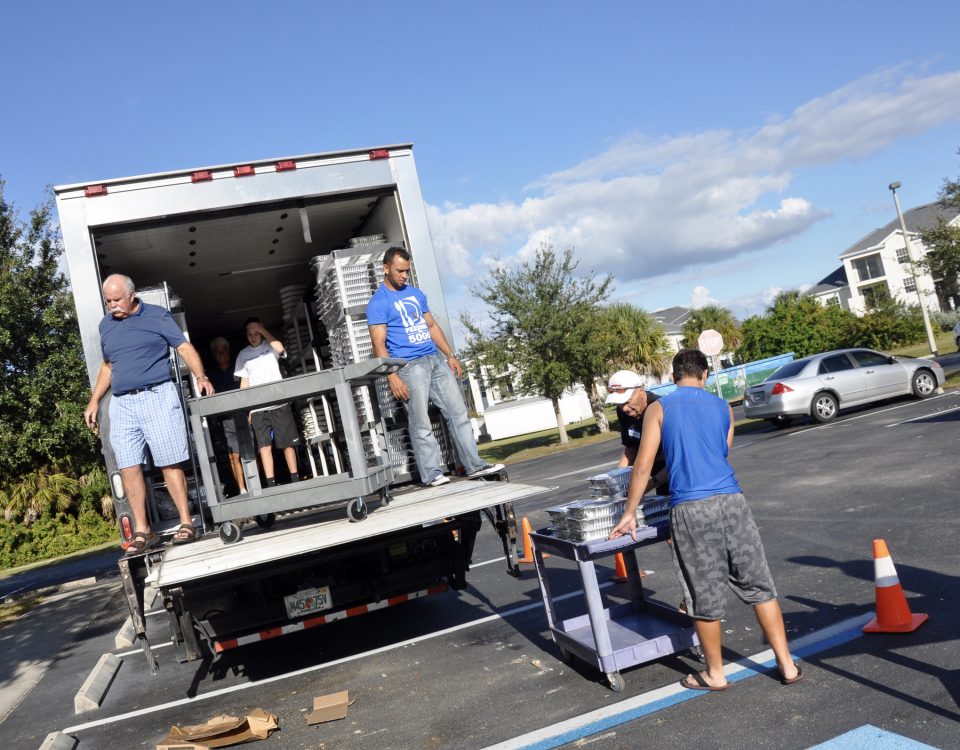